I’ve been fortunate to be able to hunt a farm in Billtown Rd/ Seatonville Rd/Floyd’s Fork area for the past 9 seasons but have yet to see or get a pic of one of the Sitkas. Someone told me a few years ago there were some in that part of the county and I didn’t think they were serious. Guess they were!
Last edited: Nov 22, 2017
T

zone1 said:
Curious how you knew you would not have to use your buck tag? Congrats
Click to expand...

They are a non-native species to the state so there is no hunting season or tag for them. Open season year round as long as you have your hunting license. No different than if you see a mountain lion in the woods.
R

1wildcatfan said:
We have Sika deer on the eastern shore of maryland and they dont look like that. Looks like a calf, thus the non-gamey taste.
Click to expand...

At first glance, I have to admit that I thought it was a calf also. Reminded me of a story a guy that I used to work with told me about taking his cousin deer hunting for the first time up in Northern Kentucky a few years back...at lunch time when they all met back up at the check-in station to see what was brought in, there was his cousin wearing a big smile...he had some farmer's billy goat in the back of his truck with his deer tag attached to it...killed it at 150 yards with a perfect shot behind the front shoulder. I bet people are still talking about that one up there...lol

I've traveled the Snyder for the last 22 years and i've seen the Sika deer on 2 occasions. The first time i saw them, there was one male and 5 females. He sported a handsome rack. The second time, there were 8 females. I've also seen a white deer on that same particular farm. Not sure if it was a true albino, but white nonetheless. I have a few friends that work for a construction company that did work on this piece of ground as well and seen sika deer there on multiple occasions. I was also told by local residents that years ago, someone in that area had a collection of exotics and most likely some were released or had escaped.

Nice! I have seen the Sika Deer up there before. I saw them from the Gene Snyder while driving through. Just south of the Snyder near the Billtown exit. I hunt my in-laws place down on Routt Rd. It would be a haul, but I would shoot one in a heartbeat if they ever made it this far.
A

I just passed the Farm off of the Gene Snyder and there was a couple of those deer eating at one of the feeders. They were dark brown with white rumps. I travel through there quite often and that's the first time I've seen them. Pretty cool looking deer.
R

therookie said:
There's a decent herd of them that hang out in the area where Billtown Road meets Seatonville. Fish and Wildlife has acknowledged them.
Click to expand...

This is correct. Been know for several years! Congrats
R

zone1 said:
Curious how you knew you would not have to use your buck tag? Congrats
Click to expand...

It's a nonnative and considered exotic

I have heard guys talk about them a few years back on here also.also in the same area as you guys are speaking about too.

I hunt the same area. Congrats. Its definitely a Sika deer. I had one crossed the road in front of me on seatonville. They bound like a mule deer

Congrats on bagging the best form of venison of all the deer species. I would pass up a B&C whitetail for a sika spiker.

I have hunted successfully several times in Scotland, and will be heading up to MD to give them a go in Jan of this year. If you really want to focus on them, a sika whistle call in mid to late Oct will work wonders. They are very aggressive during their rut.

There are several subspecies, but outside of TX they are almost all the Southern Japanese sub species. Out in TX they have some of the manchurian subspecies and these are much larger antlered.

Oh, and not trying to be a grammar nazi or anything - but these are SIKA (pronounced SEE KA, unless you are in MD then they say SICK AH). The SITKA are a type of blacktail found in Alaska, and are a completely different genus and species.

I'm not sure what constitutes a small population but Floyd's Fork ain't hurting I can promise you.
Yes they hop like mule deer,
They sound like cats fighting when they bugle. It is very odd.
They eat more corn than whitetail too!!
What we have found is they love the thickest areas and don't stray too far from that.
I bet I have watched a record stag walk by before. That dude is a monster. The landowner loves them and he won't let us take one.
That's cool. You have to abide by the rules! 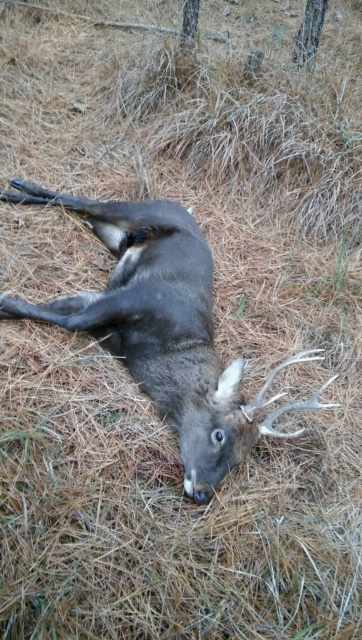