It's Gardening Time Once Again !

One Queen of the Night top stems dropped from my cacti last week and was just potted; not within the correct potting soil mix, because the boonie swamps of Kentucky do not have any, nor proper supplies in order to create such. My hope is that somewhere in Paducah might have some perlite, being that I already have some peat and access to coarse sand. 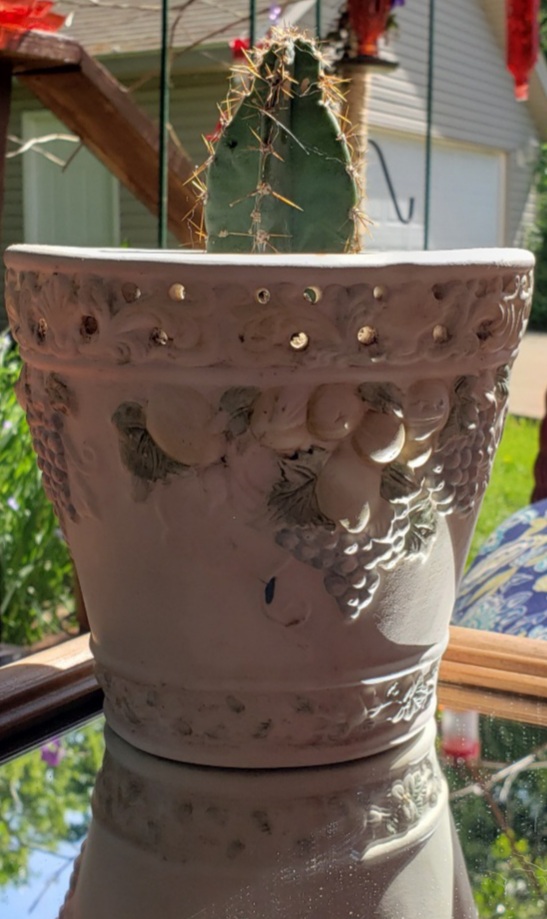 She should eventually bloom one night a year. She is third generation propagation, the mother plant having once grown to 20' belonging to my grandparents. After forty glorious years, she began to suffer from tip rot and once dropped a stem of her own, which I successfully propagated and is now 3' tall; this one now the grandchild.

10 Types of Night Blooming Cereus You Have to Grow

Night blooming cereus refers to different kinds of cacti with fragrant flowers that are nocturnal. Learn how to grow 10 of the most popular types.

All onion sets temporarily within an unused kitty litter tray, until I can prepare their ground, which is soon to become further soaked, because I have been hearing thunder, and it's become much darker around here, than when I began the meticulous cleaning-up task.

One red bell pepper was just murdered by wind, via hummingbird feeder bombardment. Dropped right atop it, chopping it in half during light rains..

Bent down like an A-frame, pulling weeds, and came face-to-face with a spider hanging between my legs. After disconnecting its silk, thinking I had rid myself of the little critter, it suddenly climbed atop my boot. Spider lives yet another day. True story. Classifying that one in the strange category.

Anyway, upon closer inspection, my red bell pepper plant may survive, after the hummingbird feeder attack; so, I gave it a clean cut.

Unsure, but I may have found some redbud seedlings, transplanting ten of them, just in case I am correct. 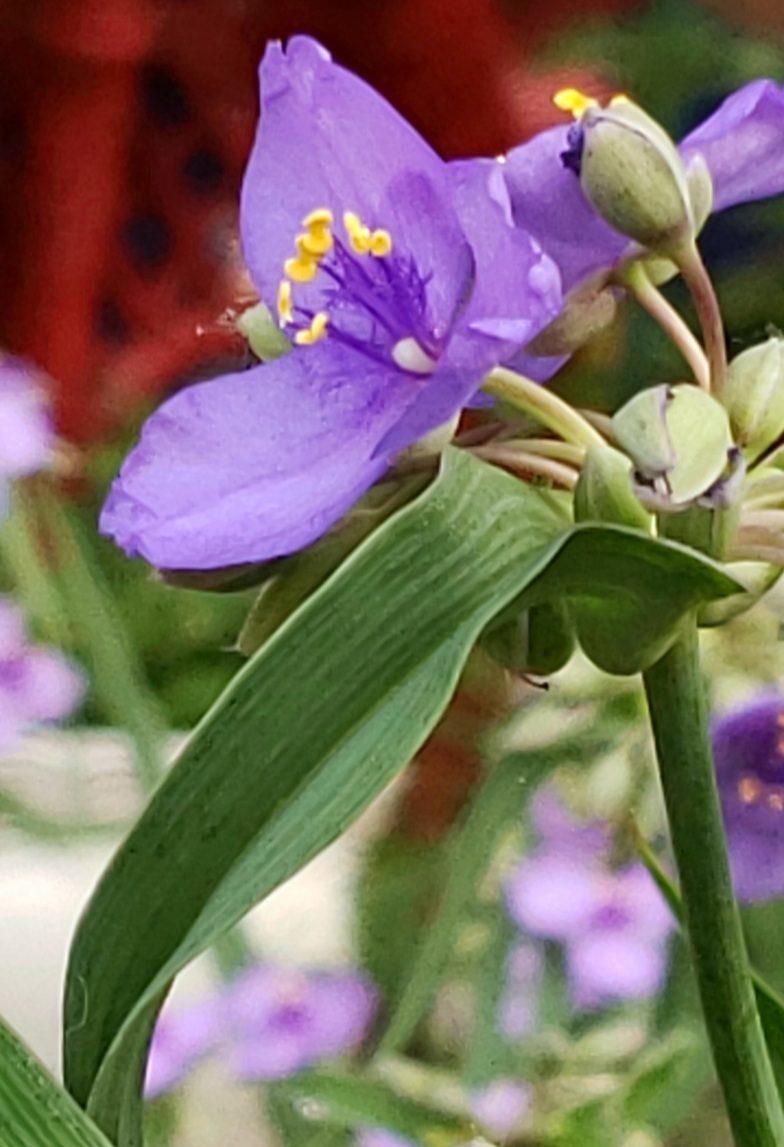 Geese began sounding-off before daybreak, temporarily muffling the calls of two bullfrogs, and then the turkeys began, followed by the lone rooster. 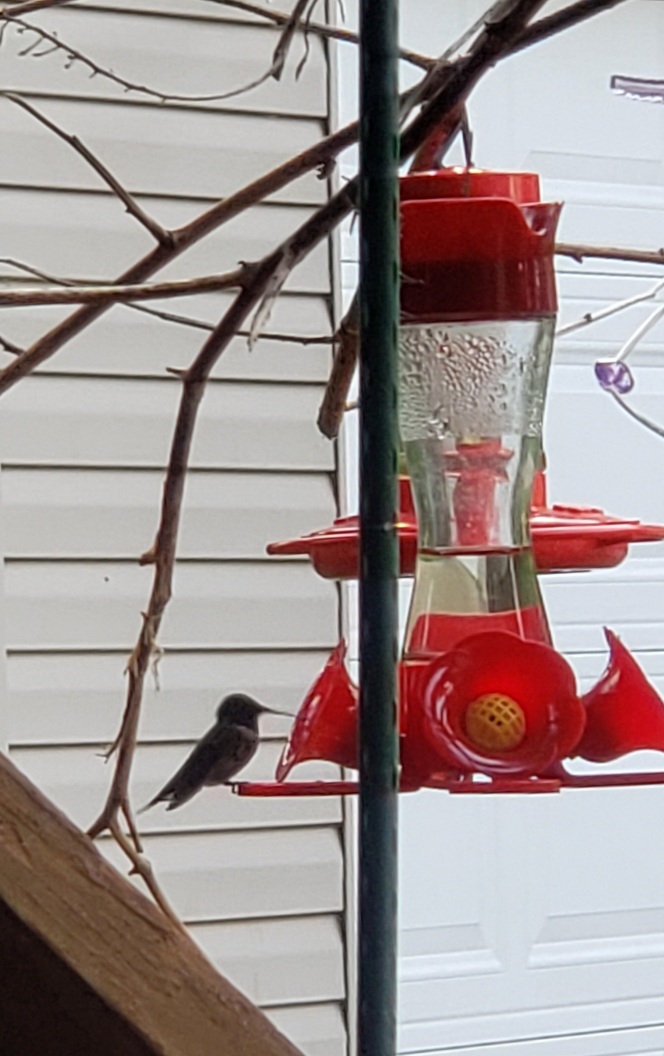 Cala lilies discovered beneath the giant hostas, soon to overtake them.

But not before I transplant some of them. 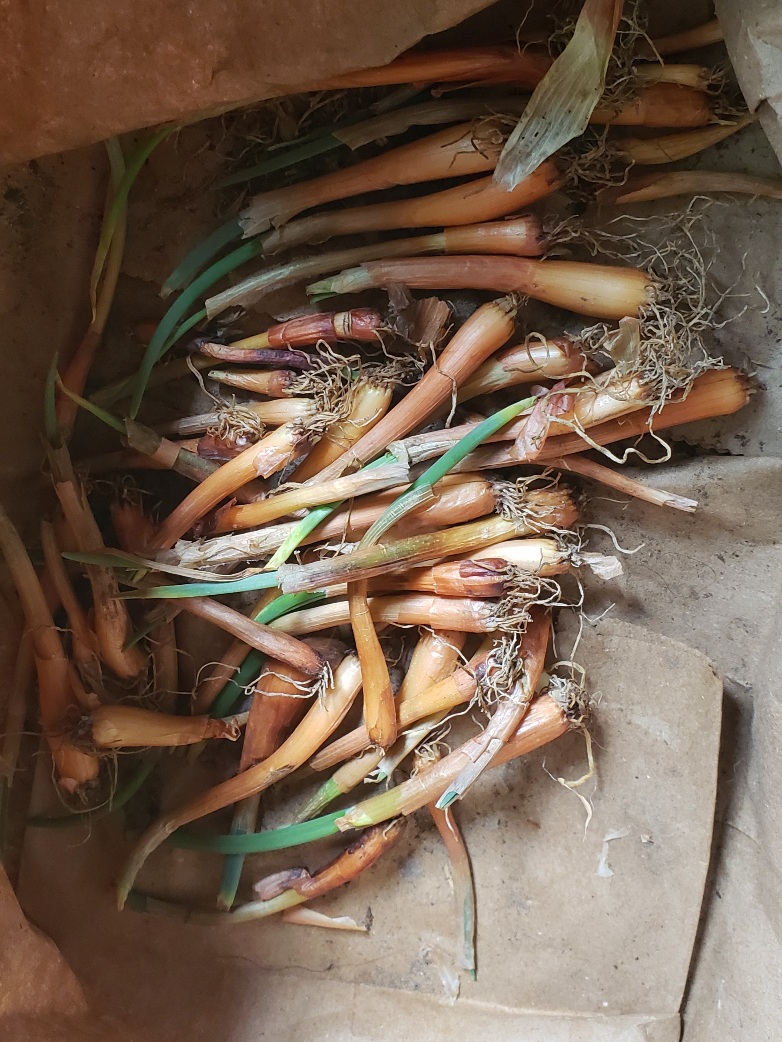 Soon to temporarily go into trays.

One red cypress vine seedling having broken ground and plucked for transplanting. Plan is to container plant it beneath the hummingbird tree, training the vine up it. The hummingbirds will love it, and the tree will then be complete. Will have the seedling grow more roots (should have dug it out), before traying it for a few weeks, though. 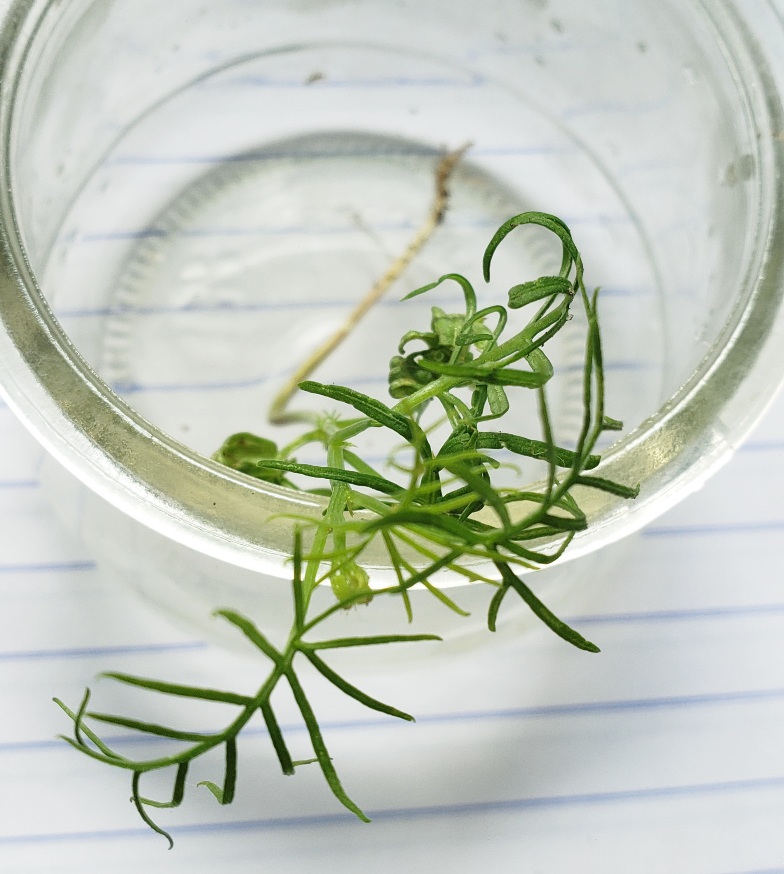 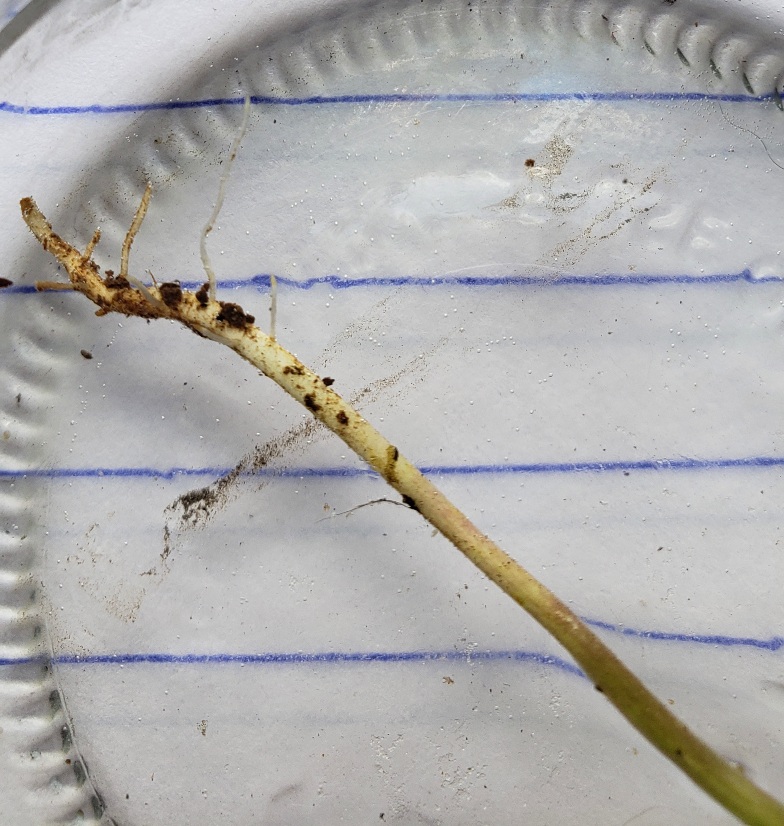 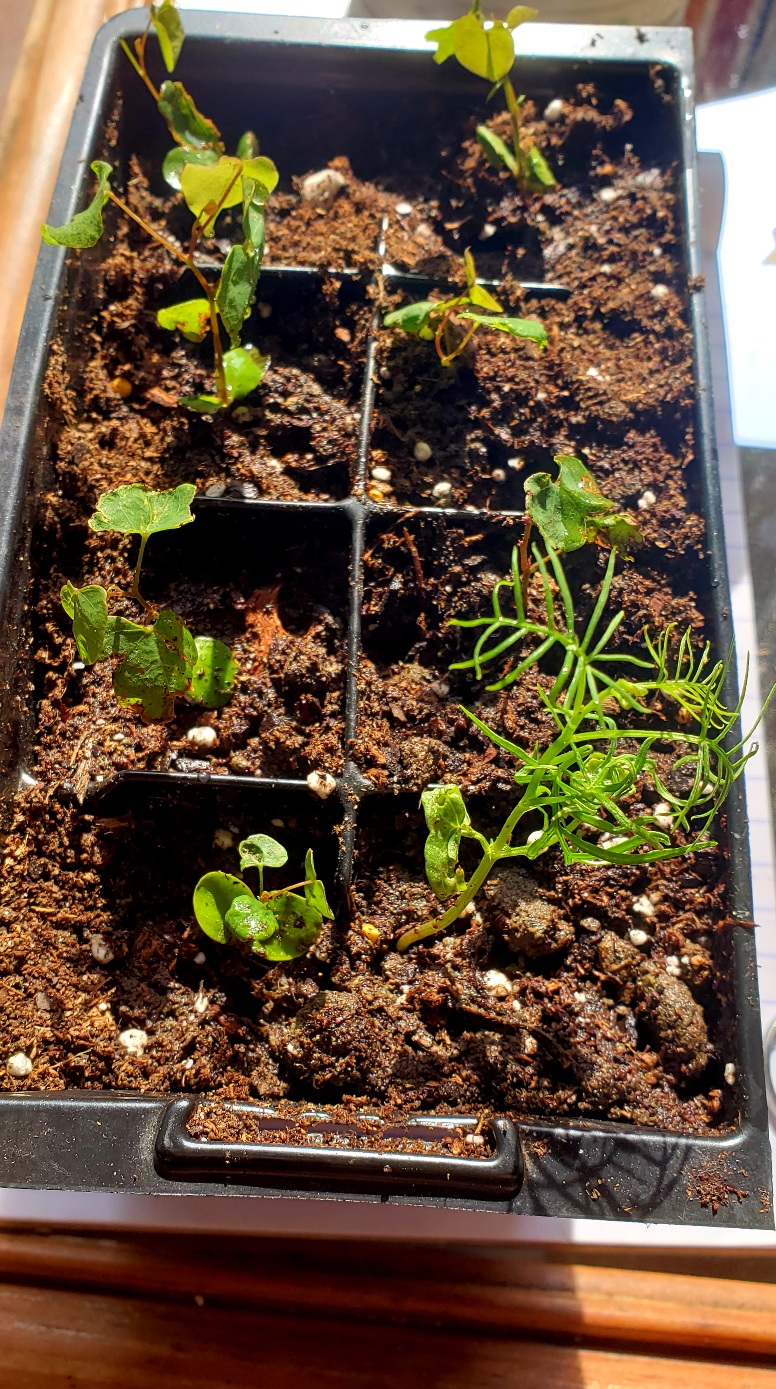 Mrs. Skink sunbathing directly above her den, located beneath the driveway. I think she is prego. Her name is Nadia. 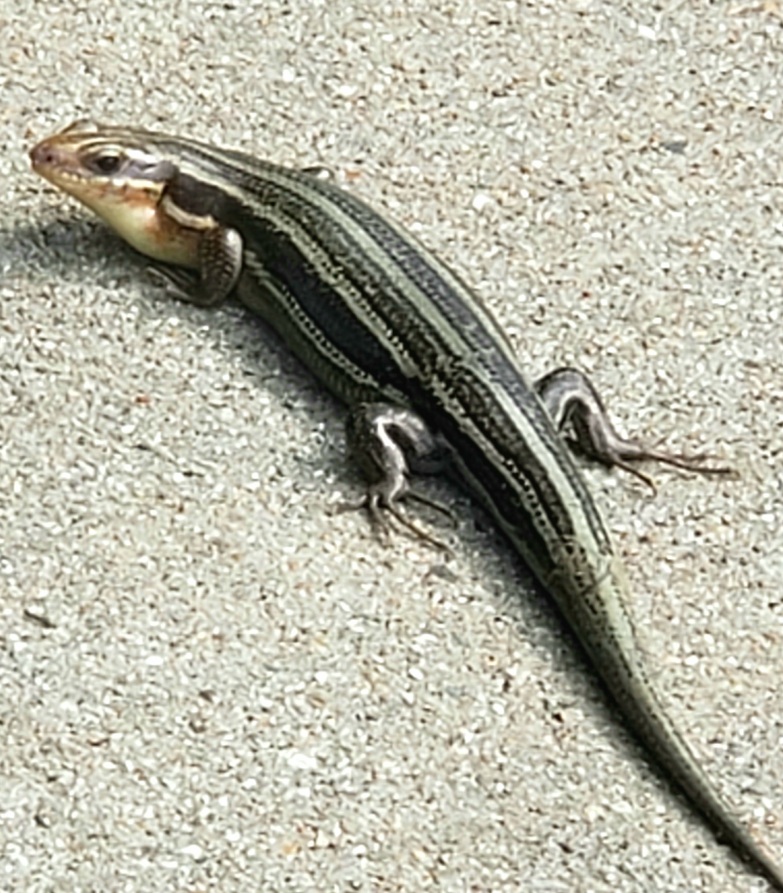 Herbie #53 and Lancia hard at work within the swamps. 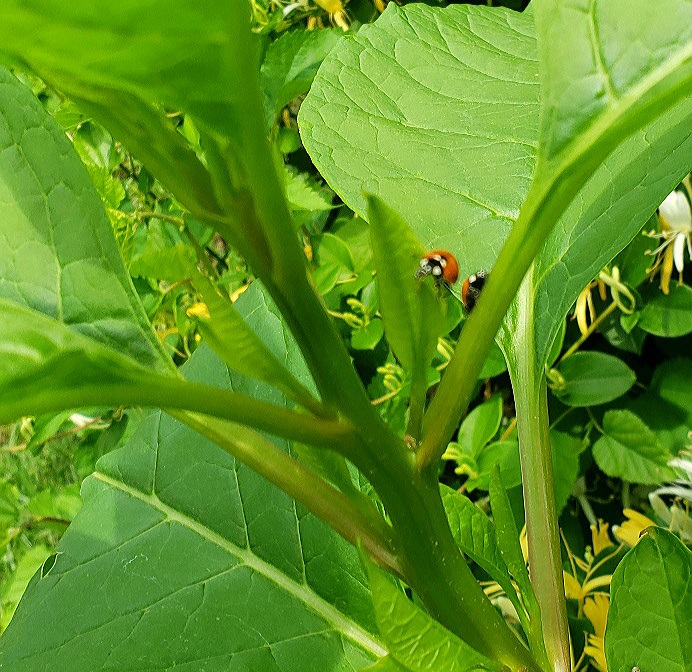 Poor ole honeysuckle looks saggy rough without its support post, but I can still enjoy its wonderful scent from 60' out and downwind, within the hummer garden. 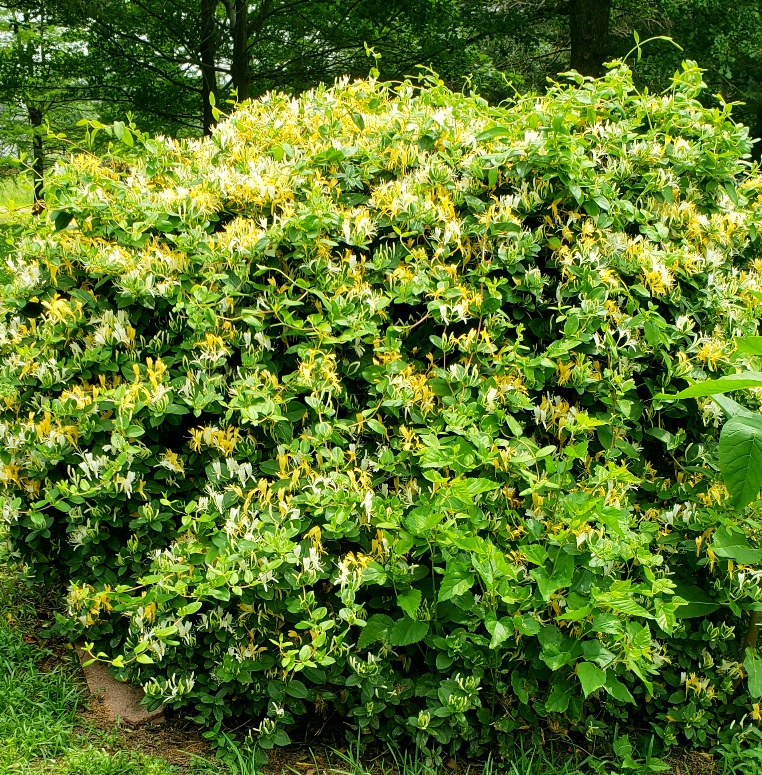 First seeds of the year just now beginning to drop and many more to quickly collect. Guess their name and you win some. 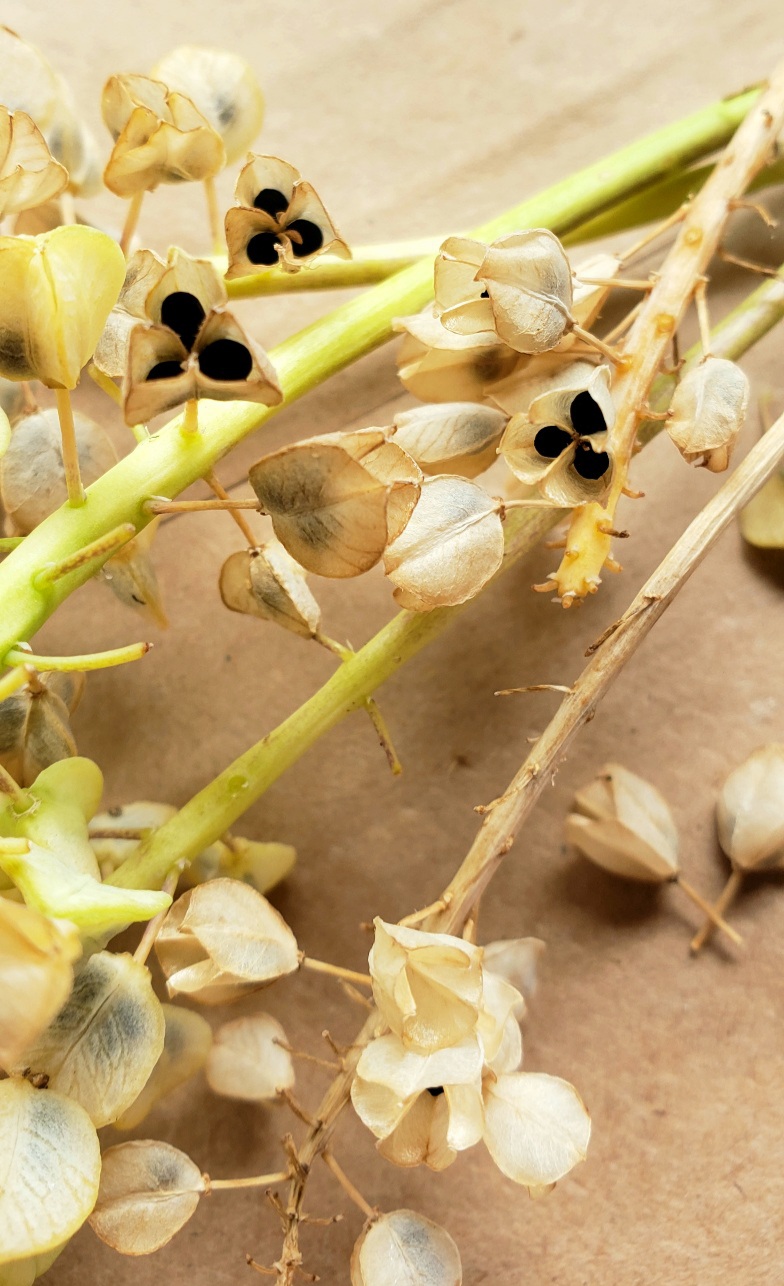 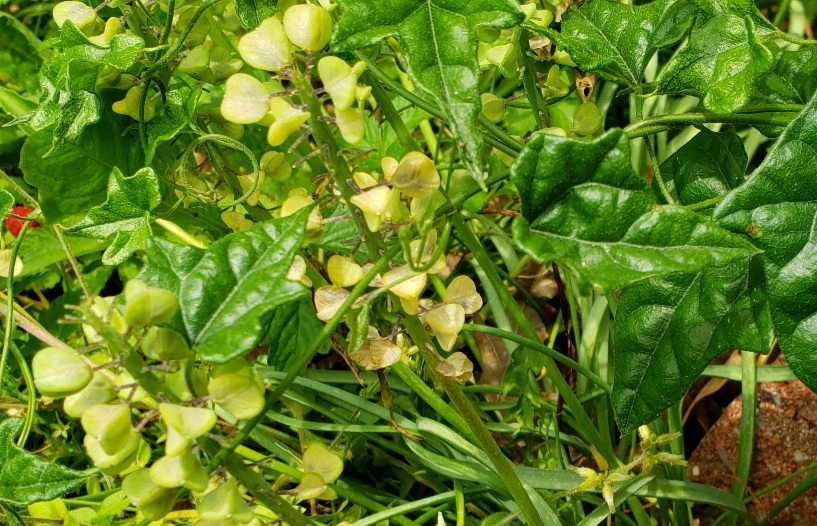 Managed a sack-full, even though all those within the grass were decapitated by the amigos. 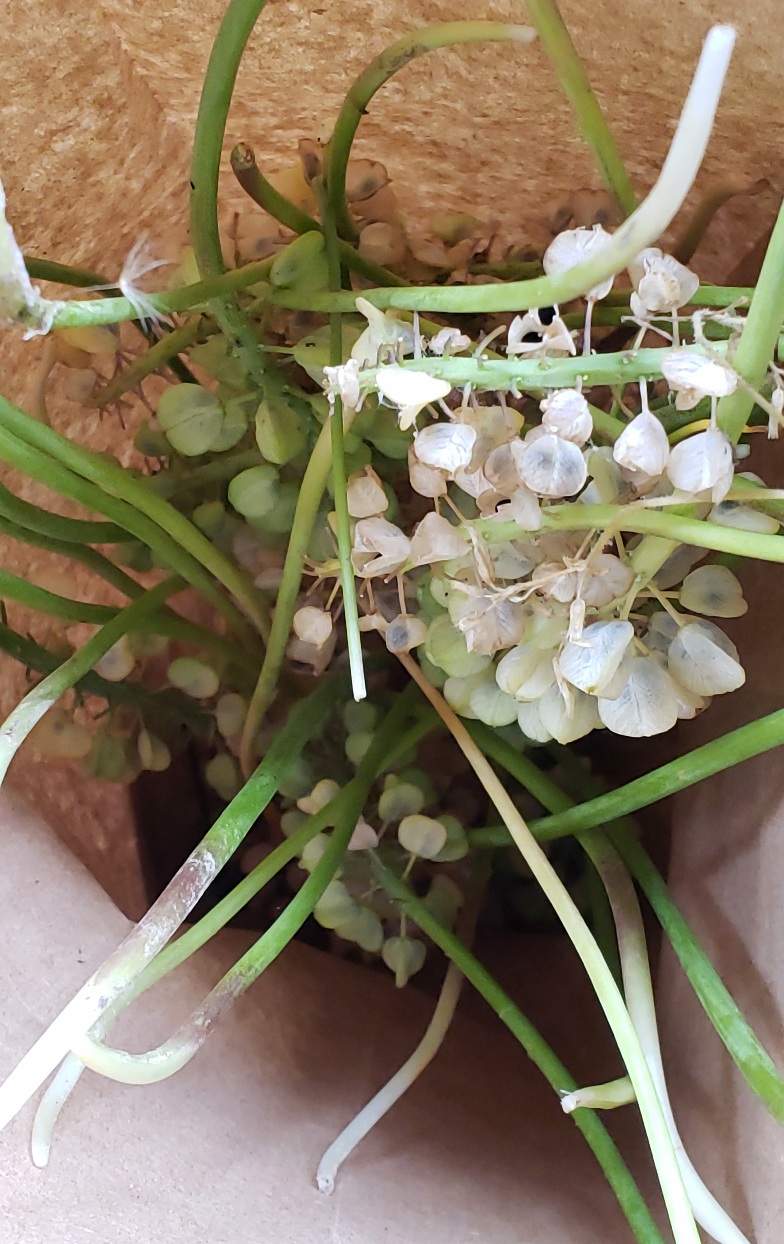 And in the process noticed my pink astilbe began blooming, before I ever got around to transplanting her into a much more shady locale. 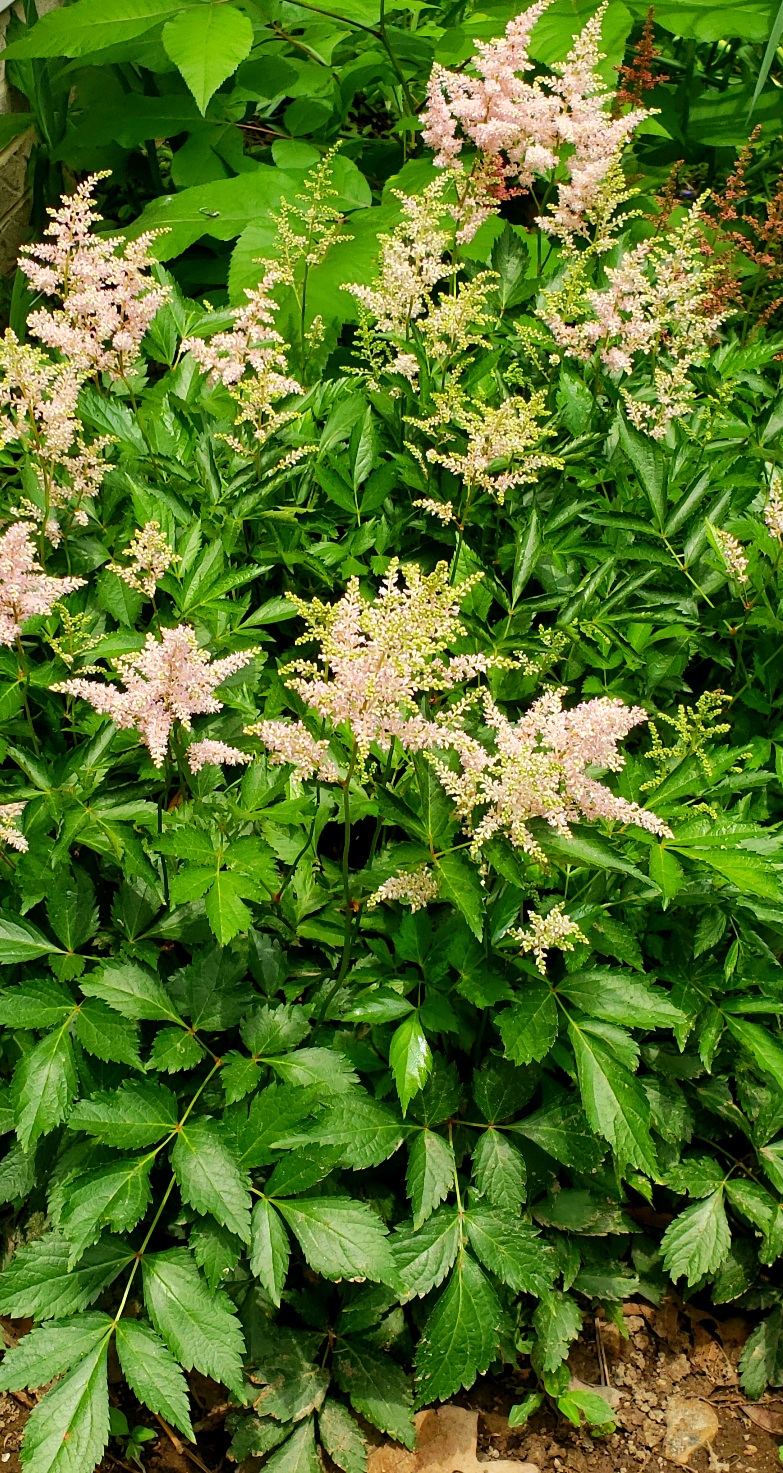 Might manage to timely grab the smaller ones behind her.

Breck's has 50 seeds listed at $50.00 marked down to $11.00, and they don't even have the white ring on the blooms like mine do, nor like the one photographed within the stackpath link. 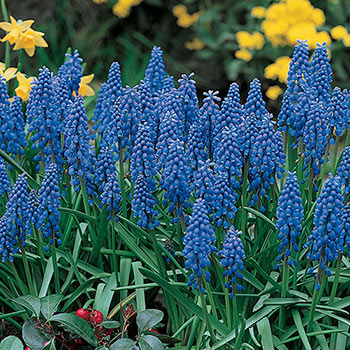 Nadia crawled 25' into the hummingbird garden and onto the deck, making herself known when only 3' from my foot, which she happens to be much longer than.

Both dogs which would have messed with her were inside the house, one only 2' from her and sound asleep, while the third was on patrol. I closed the door, so that Nadia would not crawl inside with them.

Poured some water directly in front of her, and just like any pet, she immediately took a big sip. We then kept studying one another, neither moving for a while.

She is an intelligent critter. She ended up crawling beneath the dog blanket and then into the spiderwort garden, in order to further hunt. I caught her yawning here.

Nice pictures. There may be some romance in the air here today. 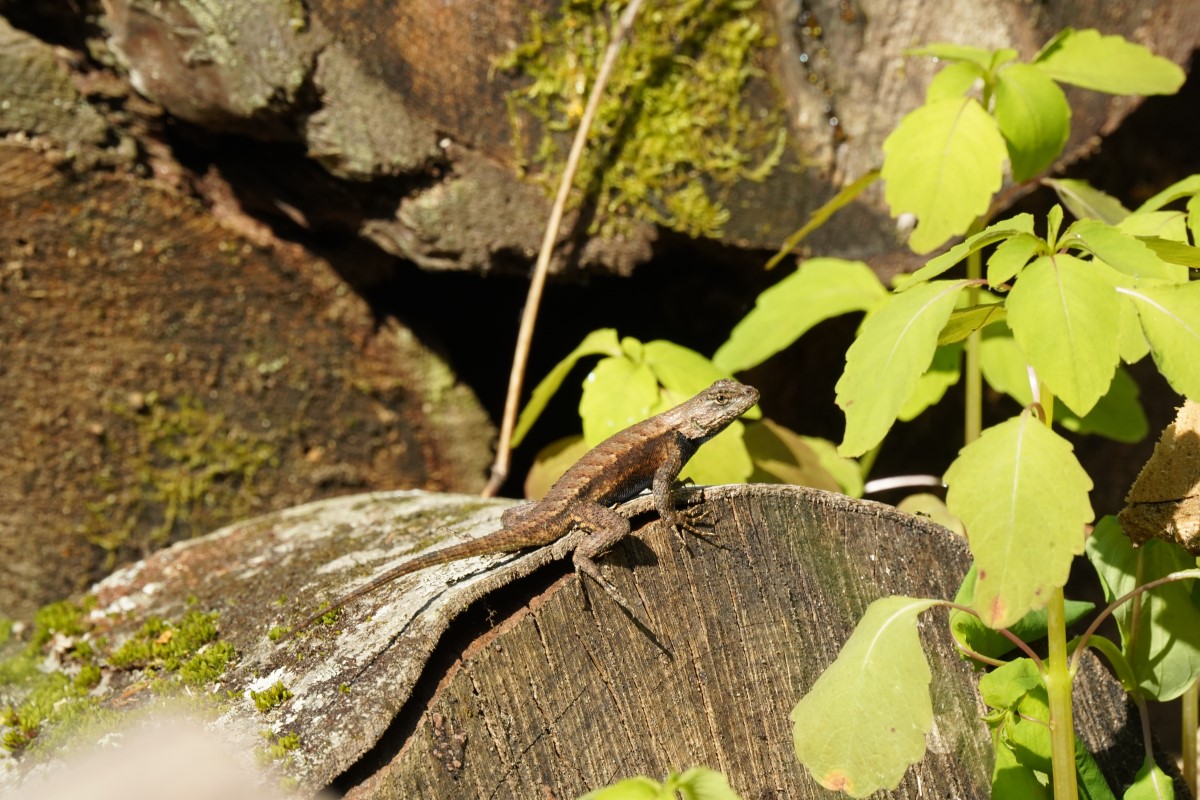 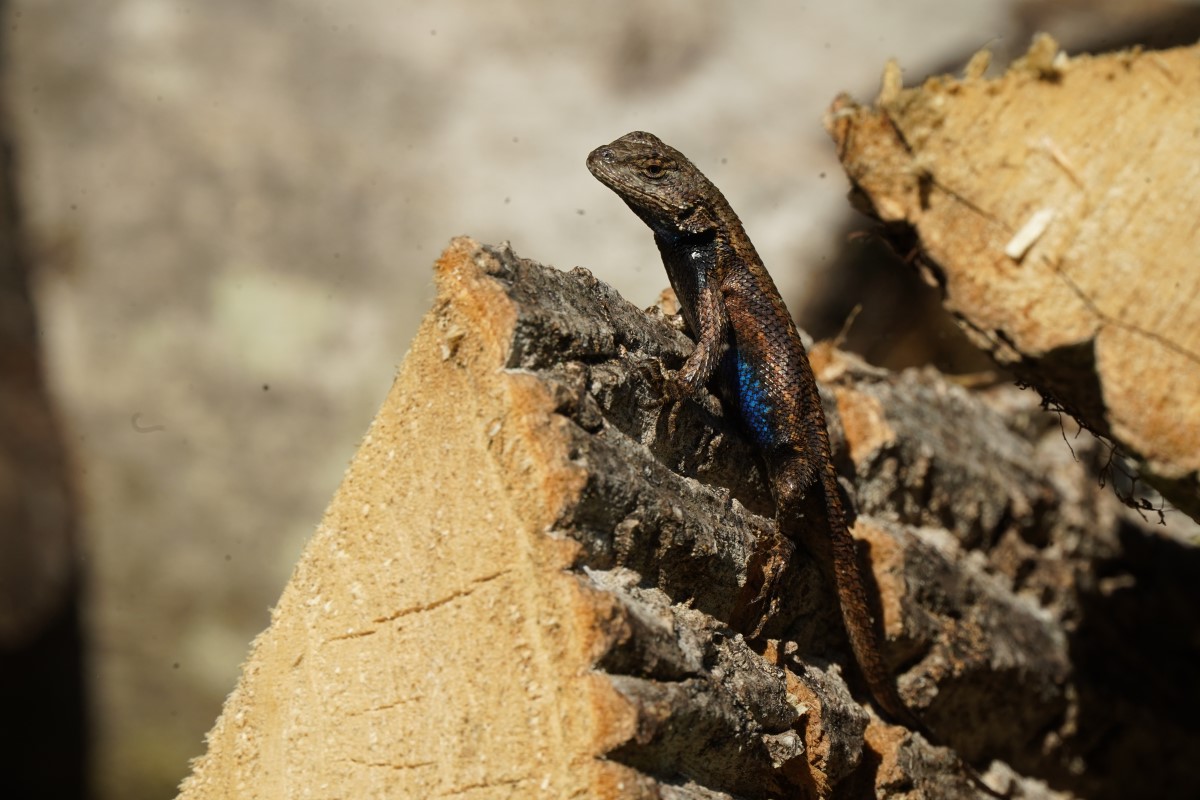