HuntsItAll said:
View attachment 62452 View attachment 62453 7/13 update!! Everything coming along nicely. I planted the perdovick seeds. My plants average about 4ft tall. With some around 5ft tall. Starting to head out. Most just have 1 head on them, but did notice some with multiple heads?? Is this normal? Also for the guys who planted Clearfield seeds. How tall are your plants? I’m not expecting the heads on mine to get as big as the ones hunt-4-life posted.. Maybe because of the type of seed I planted.
Click to expand...

Fields looking great HuntsItAll,
I planted the Clearfield and they are about 6'-7" tall at this point. Once the heads fully form and they start to dry down they will end up about 5' tall after the heads droop over and face the ground. 99% of the plants will have 1 head, there are some odd ones that have multiple but their heads never develop as big as the others. I do have about 6 rows that I double planted due to using the wrong plates... those plants are smaller and super close together; will be interesting to see head develop on those. I think I may like hunting over 4' sunflowers, would be easier to mark birds down. May have to try some of those next year. Keep us posted on the head development. I would assume head development has more to due with soil conditions but I am just speculating at this point.

Thanks for the reply. My plants are also double planted. The peredovic seeds are fairly small. I used the plates my buddy said he used. Could be cause for my smaller plants?? Also could be why I only planted about 5 acres using a whole 50lb bag of seed. At $45 a bag, I said what the heck and planted on. Also, I didn't do a soil sample to see exactly how much or what type of fertilizer the ground needed. I just went with guestimate of 100lbs per acre of 10-10-10. Being my first year planting sunflowers, I didn't want to go all in and it be a flop.. I figure I will learn things as I go!!!! My main concern is with the location of the farm I planted on?? It's about 15 miles out away from the area I do most of my dove hunting. Not any other dove attracting fields near by. The main area we hunt has about a dozen dairy farms or feed lots that chop silage within about a 10 square mile area. That area will have somewhere around 500-600 acres of corn chopped. Not sure how many birds I'll get to come out to my little 5 acre field?? I guess time will tell!!!

Most of my plants are between 6-7ft tall. Some may touch 8ft. Sunflowers seem to tell you where your good ground is and where your not so good (or wet) ground is. I like planting around 24-26k seeds per acre. Increase the population if it's later (say May 20th and later). The thicker the seed, the smaller the heads, and the faster they will dry down. I've got some heads the size of dinner plates. Then I've got some that are tiny. All have the same fertilize rate, which was 75 units of nitrogen per acre. It was the same fertilize ratio we use on corn, I just went over the sunflower field with the left over.

It'll be tough if silage is being chopped prior to season. 5 acres is plenty to hunt over (my field is one 2.5 acres). But the silage is going to draw some birds away. My guess is there will still be plenty to shoot at.

The head size will be due to the population. It won’t be a difference in Clearfield vs cheaper Peredovik seed, although typically Clearfields will get taller. All the same type seed, just one has different genetics.

I planted at four different times so all stages of growth this year. I’d post pics but it’s a pain to do so anymore. 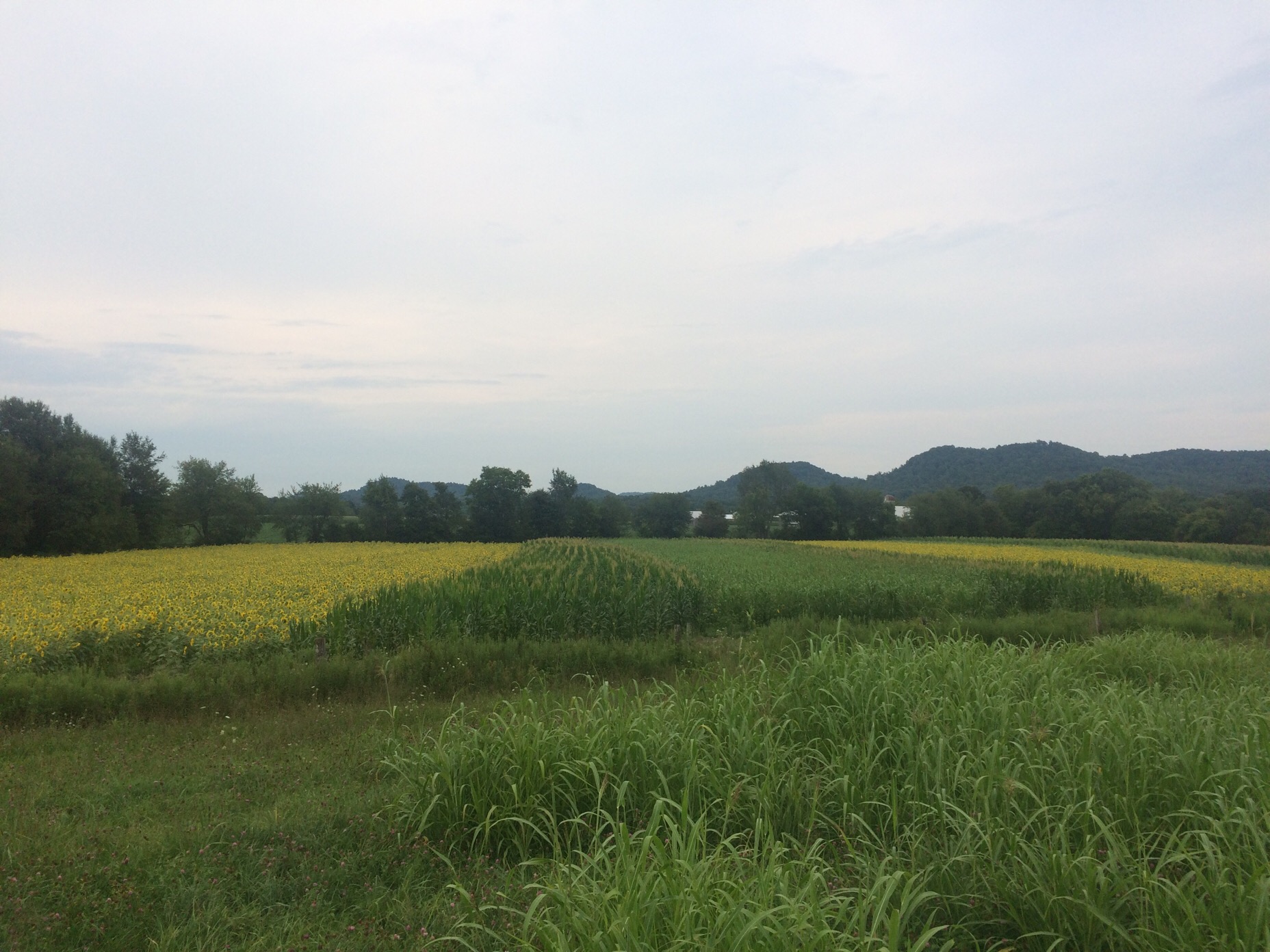 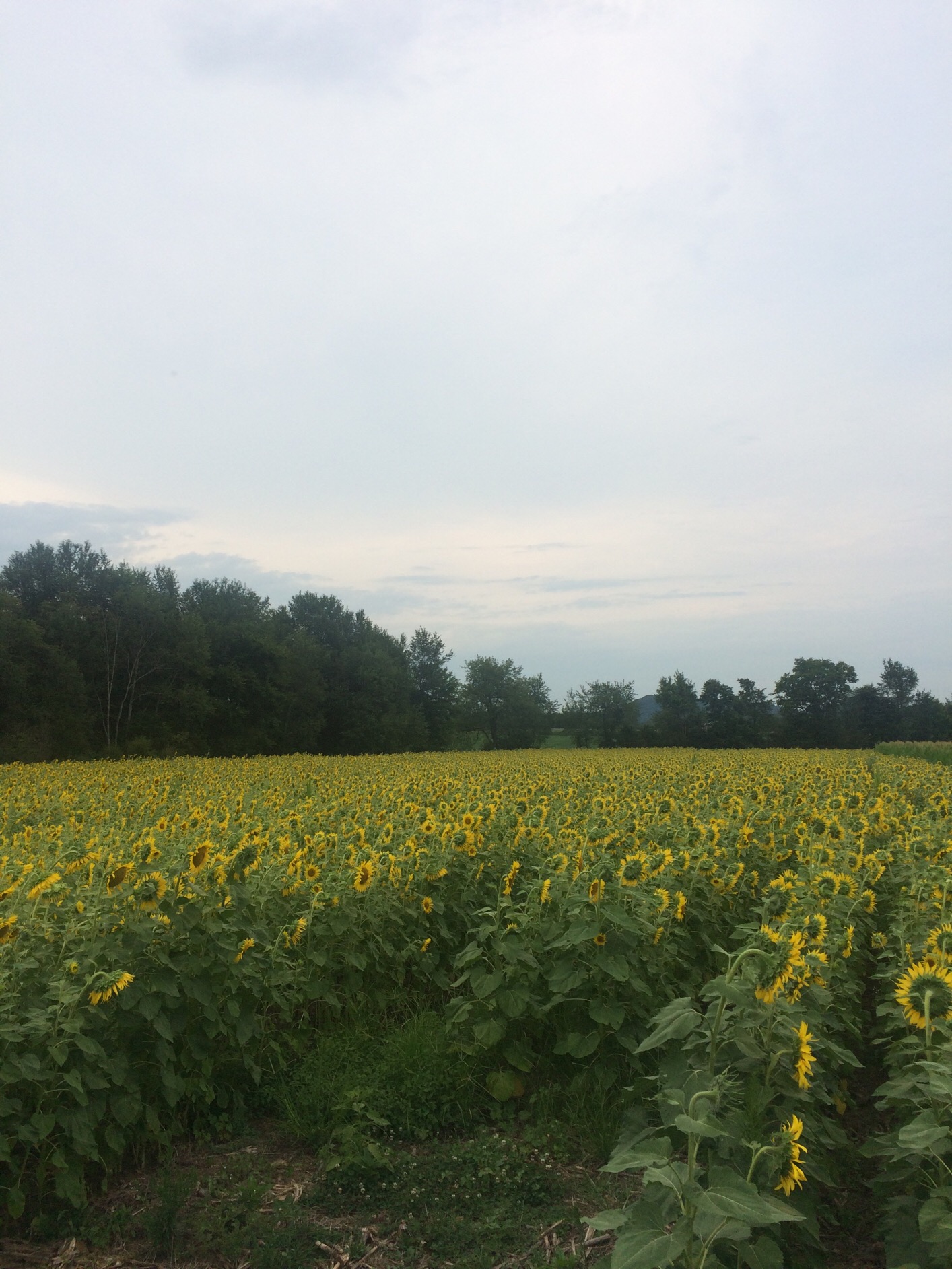 7/30 update. Sunflowers are almost all bloomed. Average head size is about 4in diameter. Average height is about 5ft. Hoping they start drying out soon.
Top pic is the layout of the whole field. Sunflowers on the left. Then corn. Then a wildlife blend mix of sorghum, sunflowers, milo, and millet. Then corn. Then sunflowers. Then the rest of the field in corn. So far, pleased how everything has turned out. Just wish I’d have gotten it in the ground about 4 weeks sooner. 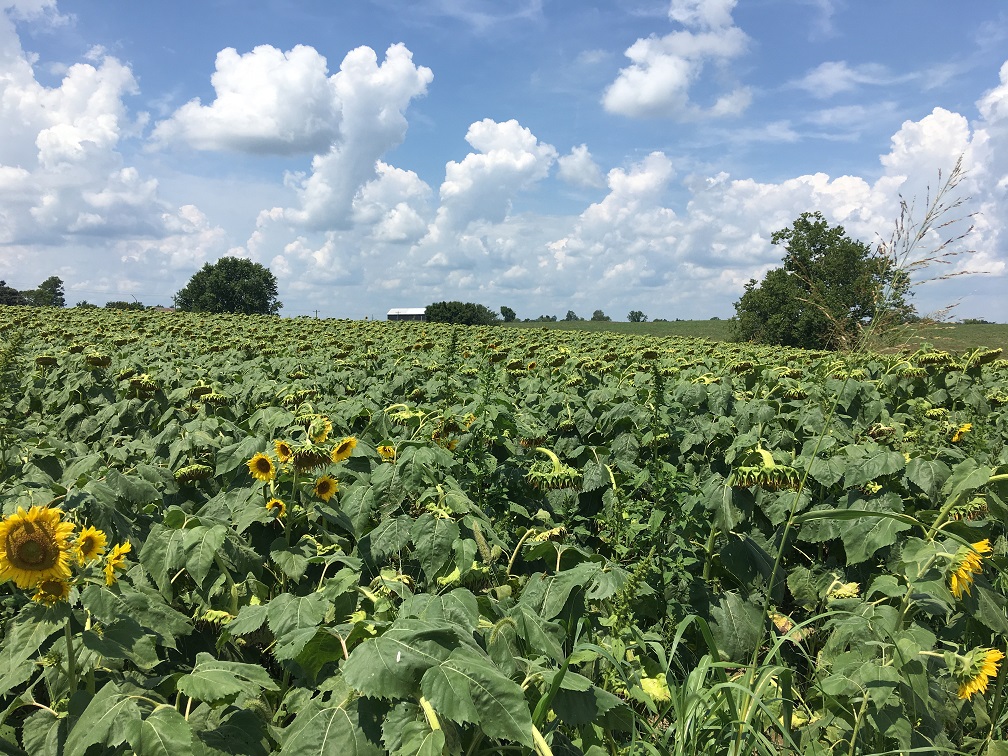 They may be pushing drying down in time for opening day. When's your shoot scheduled? Looks like the doves have already been hitting them tho.

That pterodactyl going to eat all them doves.

LOL nock, That pterodactly along with the 4 or 5 hawks have been wreaking havoc on the birds thus far.
Hunt-4-life21, I will hold off opening weekend as long as I get invited somewhere, if I don't i may have to go with just a select few and have everyone pick their shots to get birds to land "close". I will probably mow 20% or so of the field down the weekend before the opener on the 25th or 26th.

I have a friend that planted later than you, like around Memorial Day, that's doing the same thing. He's waiting til the second weekend (maybe later). That's the best way to dove hunt. Get a circuit going and have places to go all September. I think I've got an invite for the whole opening weekend, besides Sunday, and the next Saturday. I'll shoot mine on Sunday afternoon.

Got the party started Sunday morning early. Mowed two rounds to get them started. My flowers have been dry for 2 weeks already. I think they were planted about 10 days too early. But you just never know about mother nature. Take what you get and roll with it. 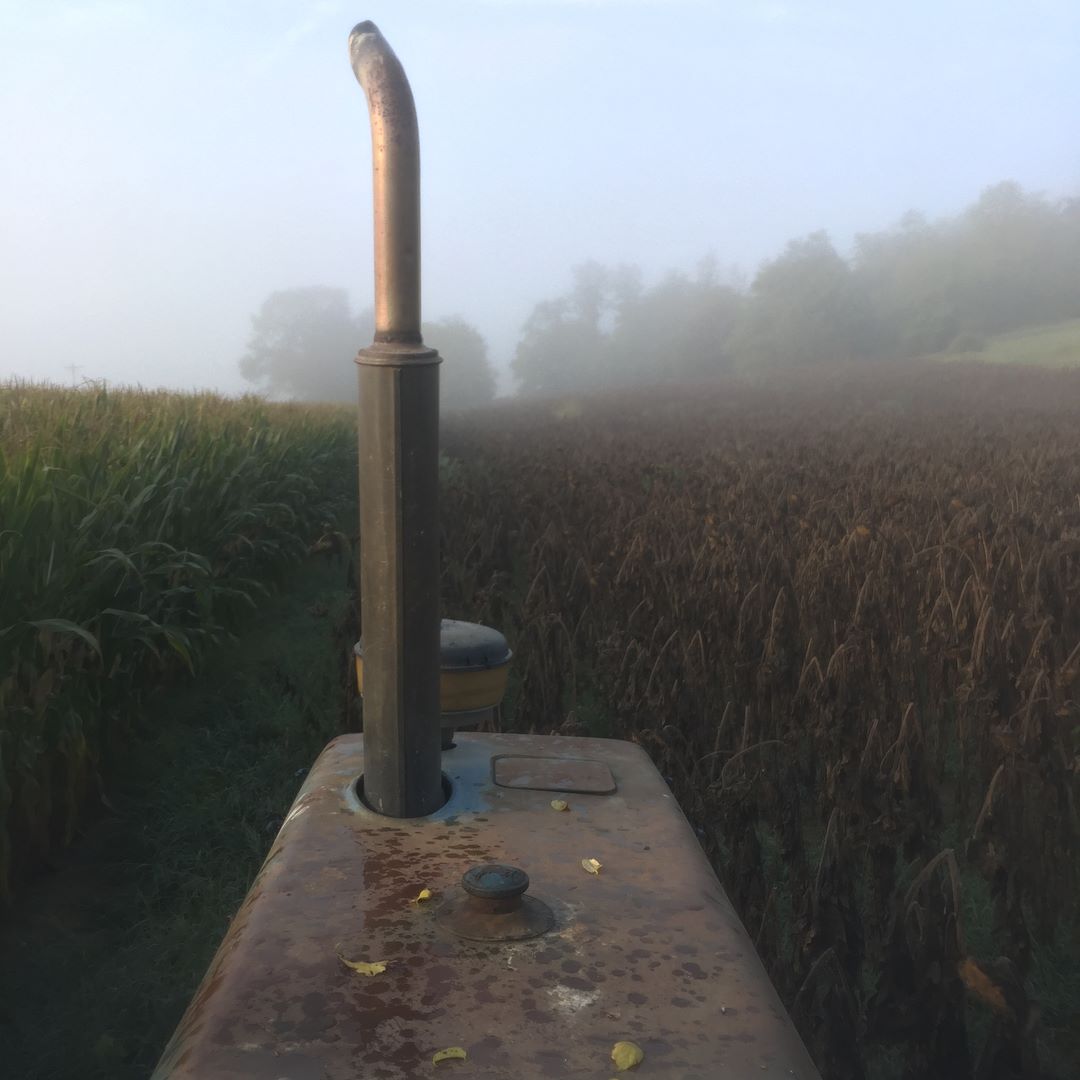 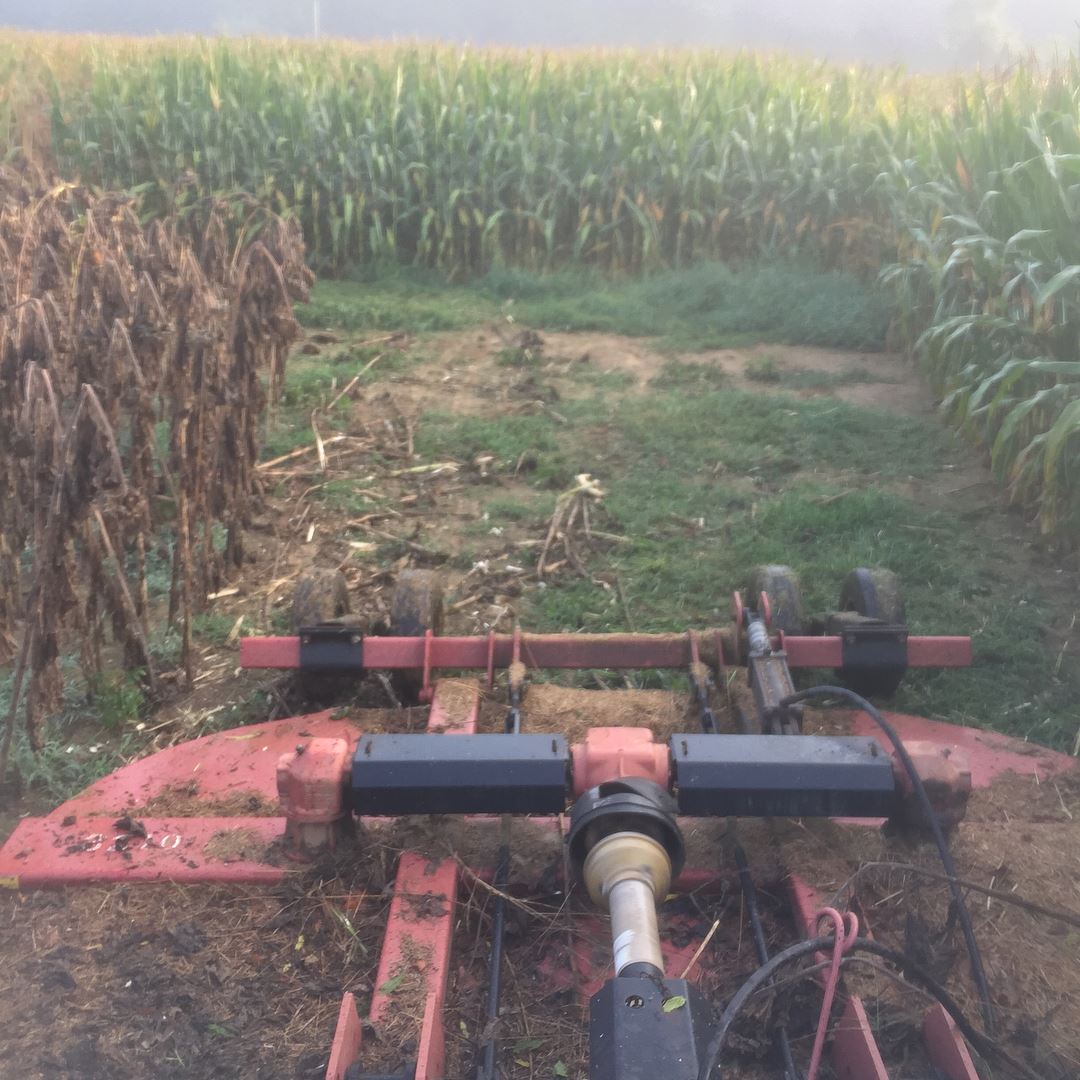 What’s your plan on mowing?

We bush hogged about 10 acres of the field across the creek from our dove field sunday. It was in corn last year, but just left to grow up this year in weeds. We had mowed about 3 acres back around the first of july. Several doves are using this field now. It has a powerline running through it, and we're seeing more and more on the lines in the last week or so. When I was bush hogging, doves were constantly flying up out of it. We're hoping mowing that field will attract more birds to our sunflowers once they dry down more.

Put seed in the ground 5.23. Sprayed on 6.4. These pictures were taken 8.17; 12.5 weeks after planting. Mowed 2 strips Friday. Birds are using. They are mature enough and drying down good. Blackbirds have taken more than their fair share on the outer 1" of the heads. Going to mow about 30% of the field this weekend; final decision to be made while on tractor!