My last buck harvest was Thanksgiving Day 2011. A nice buck that grossed 138". My goal has been to always harvest a buck bigger than my last and it turned out to be much harder than I ever anticipated. I picked up a new 109 acre lease in Bracken County last year and knew immediately it had potential. I passed on every 130" + 3.5 year old last year and it returned the favor for me this year. 158 3/8 gross. I work in Georgia so getting home to hunt can be tough sometimes. Long story but IllI share my FB post below.
Here's the rest of the story. This could get long but here it goes. Yesterday morning started 650 miles away at 3:00 am in Georgia. I woke up, showered and packed for the trip home. I worked from 5:00 am until 1:00 PM then caught a 2:15 PM flight from Savannah to Cincinnati. By the time Christy picked me up at the airport and we got to our lease it was after 5:00 PM. I wanted to hunt but felt rushed and was running out of time. My Dad encouraged me to go so I took a cold shower, got dressed and made it to my stand by 6:00 PM. I blew out several does on my way in and didn't feel very optimistic about the rest of the evening. At 7:00PM a doe and fawn came around the ridge and fed in front of me for 25 minutes. The doe was alert and kept staring to my North down the ridge line. Five minutes after they left I caught my first glimpse of the buck 100 yards down the ridge heading my direction. To keep from losing my sh** I had to turn and look the opposite direction glancing back about every 30 seconds or so as he made his approach. He froze up at 30 yards out and stood there facing me for what seemed like an eternity. When he finally committed and came in to feed he ended up at 17 yards slightly quartering to me. At this point the adrenaline dump was in full effect and my heart rate and respiration was out of control. "Buck Fever" I took one deep breath, drew my bow, anchored my kisser, placed my 20 yards pin behind the crease of his shoulder, squeezed through the shot and sent the arrow and lighted knock down range. "THUD" "SHI*" The arrow hit him high and back with little penetration and no exit. He bolted off the ridge to my west and my stomach dropped. I went from the highest of highs to the lowest of lows in a fraction of a second. I knew I had just blown the opportunity I had been waiting for and chasing for years and in the process wounded a magnificent animal that I have so much admiration and respect for. I knew since the shot was high with no exit there would be no blood trail and after climbing down and looking for 40+ yards without finding a single drop of blood I hung my head and returned to the house. A phone call and some encouragement from my Father lifted my spirits and after waiting two hours Christy and I went back to take a look. We methodically made our way off of the ridge with flashlights looking for blood. Fifty yards, sixty yards, seventy yards, eighty yards and still not the first drop of blood. I just knew this wasn't going to end well then suddenly the wind shifted and I kid you not I smelled him! From that second on for the next 50 yards I was like a bloodhound being guided through the brush and darkness of night by my nose and walked right to him. He had made it 150 yards off of the ridge top before falling dead 5 yards from the fenceline and property border. The steep angle of the shot had saved me and the arrow had gotten just enough penetration to clip the back of both lungs as in entered. In shock but relieved it suddenly dawned on me that we had to get him out of there and it was all uphill. Without the help of my Wife it would of never happened. After field dressing we loaded and strapped him to a deer cart and for the next 1.5 hours we grunted, tugged, and pulled him uphill 5 yards at a time until finally making it back to where we had parked the truck. The entire thing was an emotional roller coaster that left us both exhausted and ready for bed. Certainly a day I will never forget and certainly a day that I will be forever grateful to have lived, experienced and shared with the people in my life who mean the most to me. I'm fortunate and blessed! ........ And for anyone who read this entire post...That my friends is " the rest of the story" 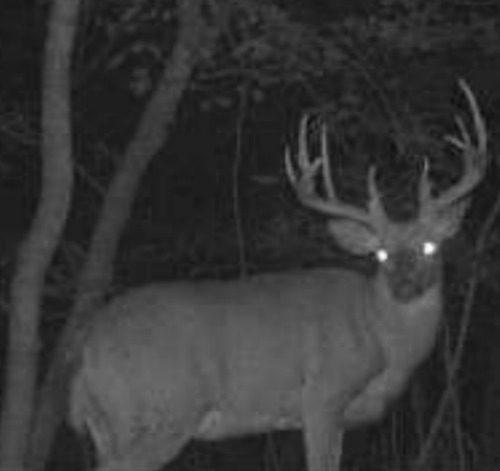 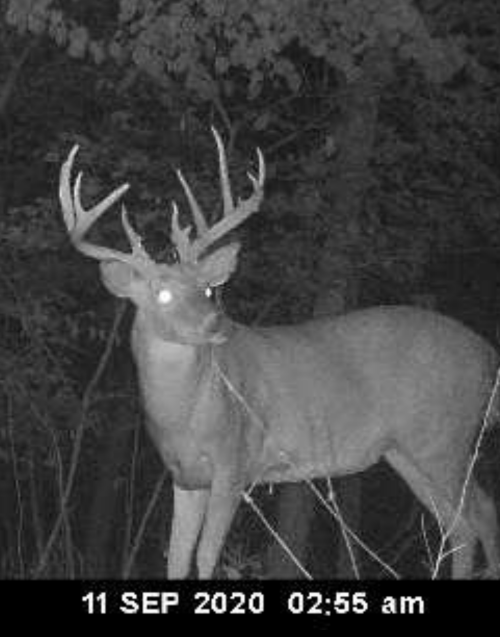 Congrats on one fine buck wow hell of a job.

Under a tree and looking up!!!

Heck of a deer man, congrats!

What a beautiful buck. That is a stud my friend. Congrats
S

Nice one for sure , congrats on the taxi bill

That's a great buck congrats! Way to let em grow! It truly pays off! You might be a while waiting for one bigger! But good luck ya never know!
B

Congrats on a great buck !!

Congrats on a fine buck!