I had planed to take the oldest to a blind this morning but when he said he wanted to sleep in Connor jumped out of the bed and started to get dressed. While we were getting him bundled up he said I heard the birds behind the house last evening. I asked if that was where he wanted to go and he responded with a resounding yes. I dug through the closet and found a gobbler lounge and an inner tube butt cushion along with the short tripod shooting sticks.

Off behind the house we go through the woods when we crossed the second creek we hung a right and I set us up with our backs to the creek and to our front is a 50ish yard wide bottom I mowed a few weeks back. I crawled into the lounger, placed the cushion on the ground between my legs for Connor. Tripod shooting ticks to my left and his 410 on the ground to my left. Soon I heard a bird sound off to our right maybe 100 yards up in the woods. I made a few soft yeps and soon one bird turned into 4.

I made a fly down call with a diaphragm and finally I could tell they had pitched down and I told Connor one of them is coming to us. I had Connor sit up in my lap and I got the sticks setup with the gun on his shoulder for a field shot. Soon I realized he was on the other side of the small creek and was to close to reposition the gun and Connor. That bird came 12 yards off our right shoulder to a rotten fence, he started to cross by hopping up on a fat limb that was lying across but the bark gave way and he slid off. He stood the for several minutes gobbling then worked his way back up in the woods. We repositioned the shooting sticks and Connor sat off the right side of my lap but instead of coming back to that spot he decided to cross the creek and was headed for the mowed bottom in front of us and coming from our right. We once again reposition Connor, as soon as Connor is repositioned that bird gobbles again but a new bird cut him off mid gobble. The new bird was coming up the edge of the next field hard off my left shoulder. The first bird went silent and never showed again. We moved the shooting sticks and Connor repositioned now sitting off the left side of my lap.

This bird came to a spot across the little drain between the narrow bottom and the big field. The spot was 27 yards away and he decided to strut in a 20’ area for close to an hour. Finally I coaxed him to cross though the road crossing of the drain. Connor was a bit tour up and whispered where did you say to shoot him? I told him once again and waited and waited I whispered shoot shoot him now then watch the bird cross past the end of his barrel and strait out in front of us hammering eyer couple feet. The bird finally walked into the woods so we could once again reposition Connor and the gun. I was able to coax him back out of the wood and that time Connor made the little 410 bark when the bird stood straight up. That load of TSS planted him right there. We were taking pics at 8:43am. Thank You Connor for being an outdoor kid.

I am taking a decoy in the morning to try and put the bird where we want him. 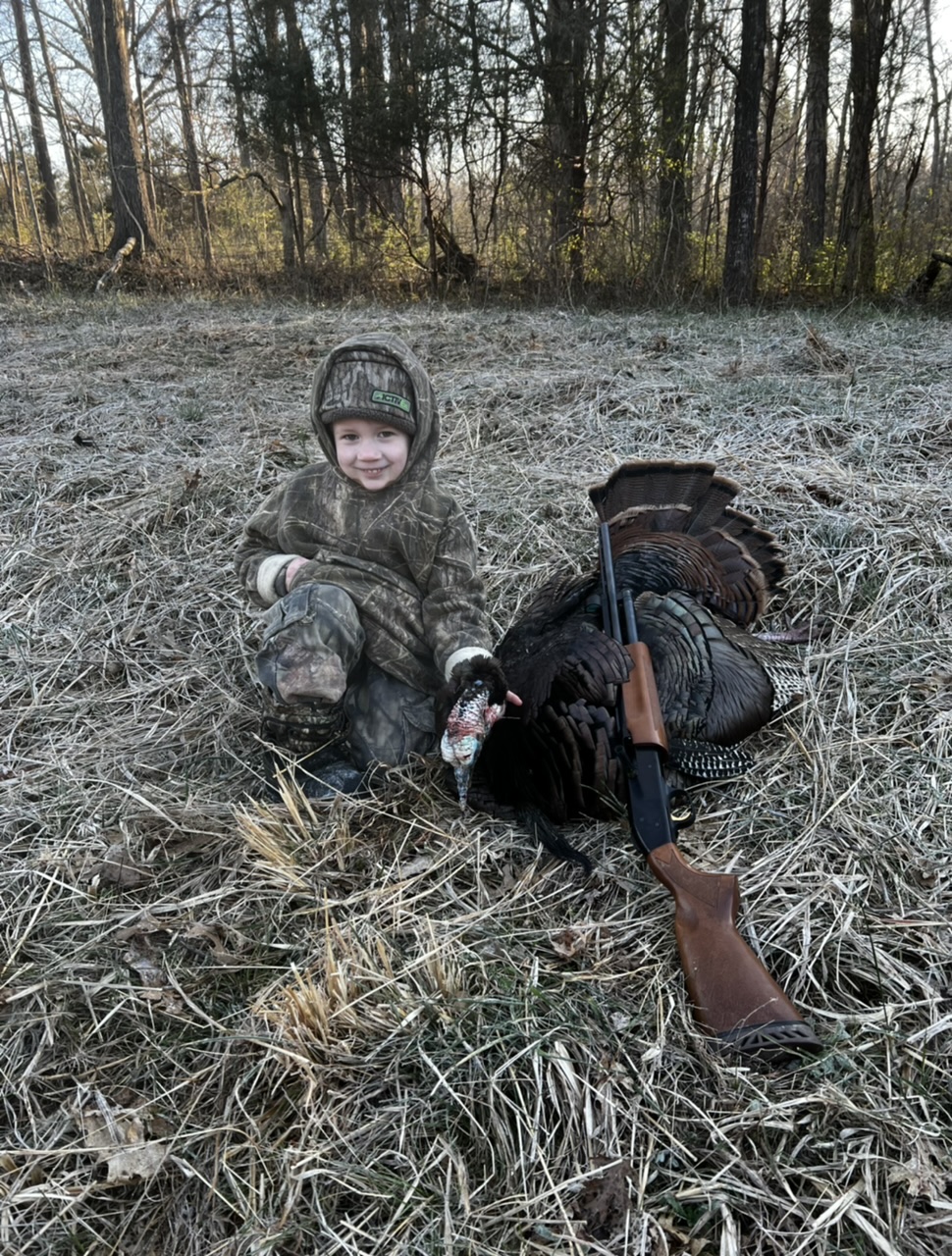 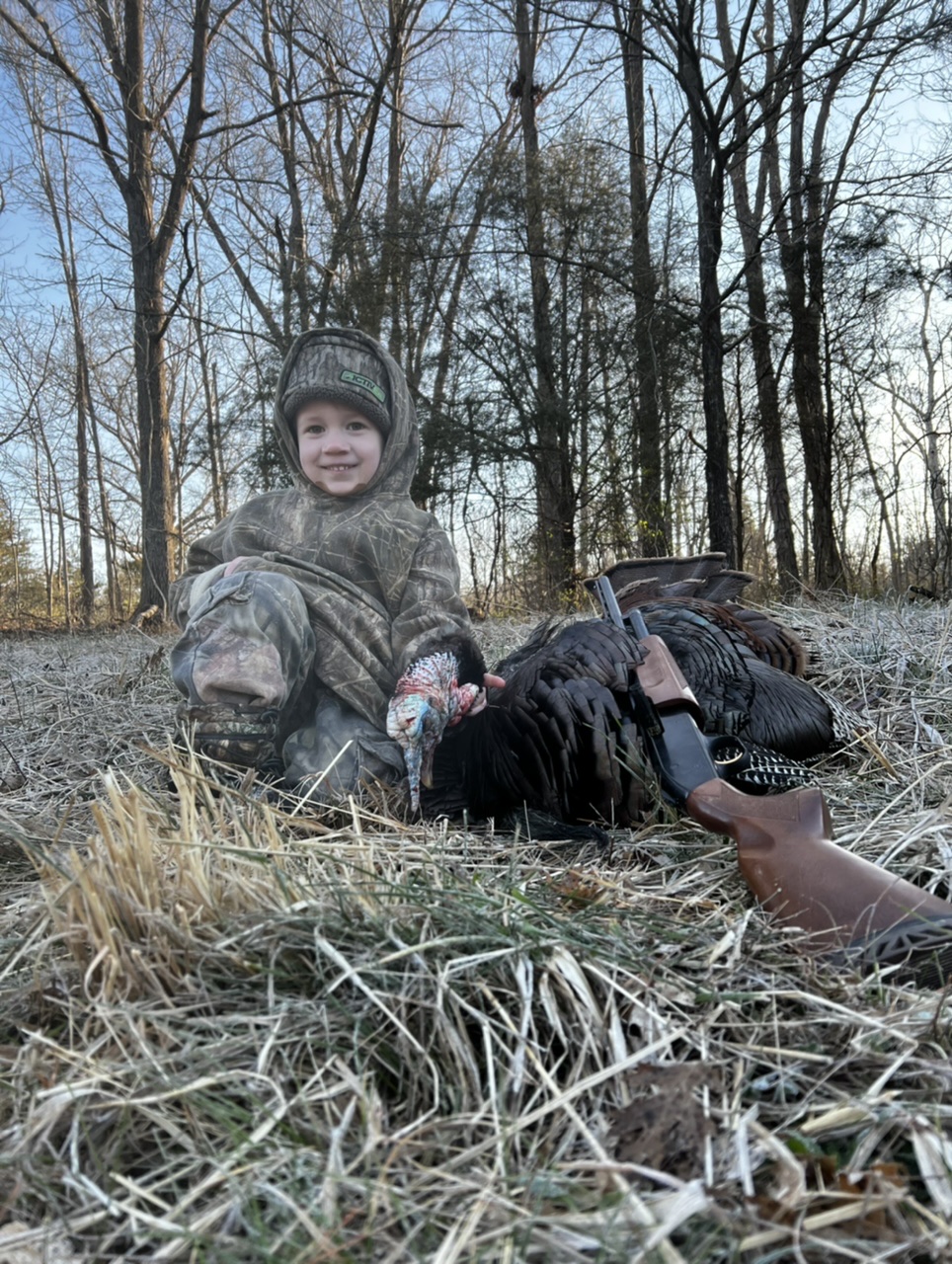 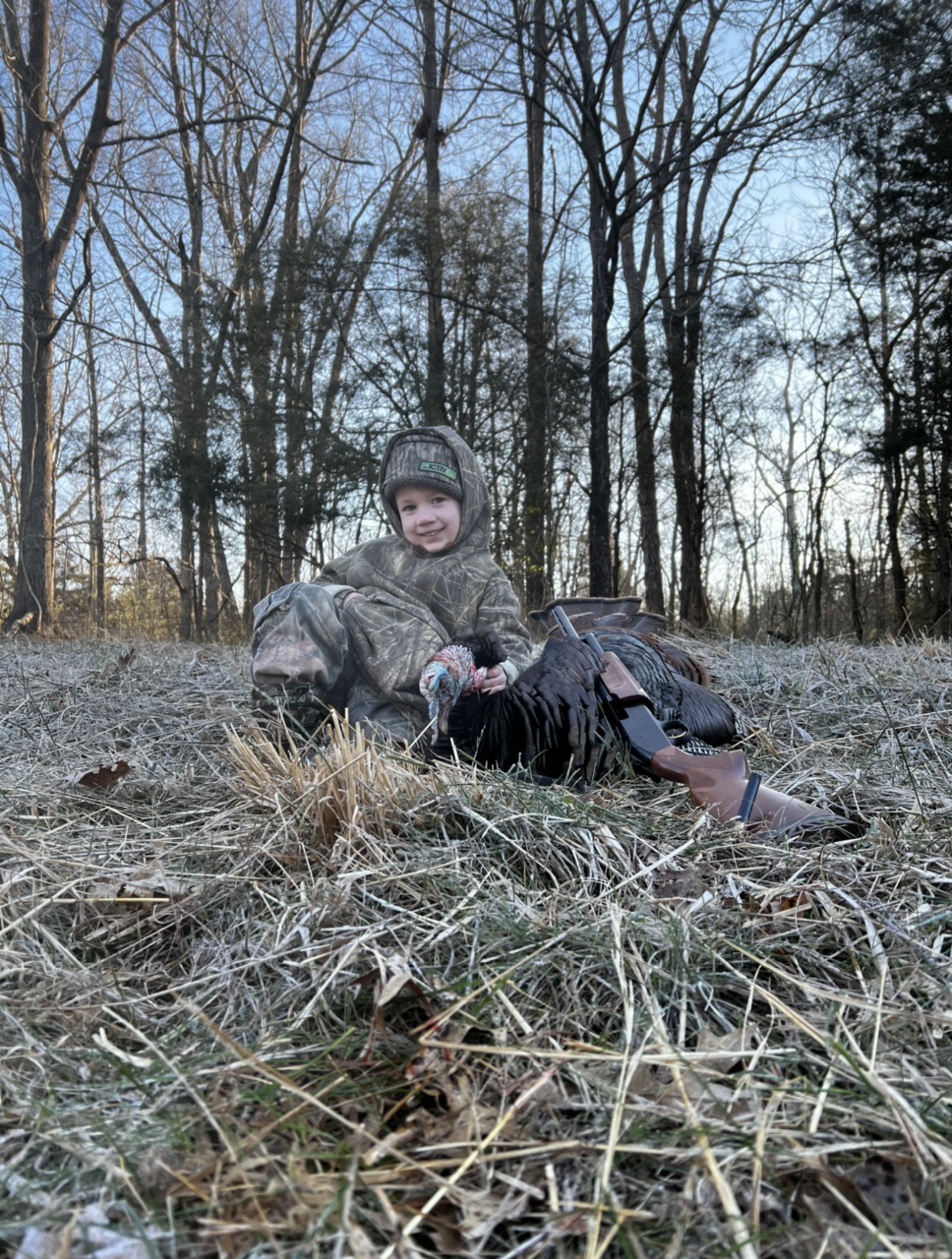 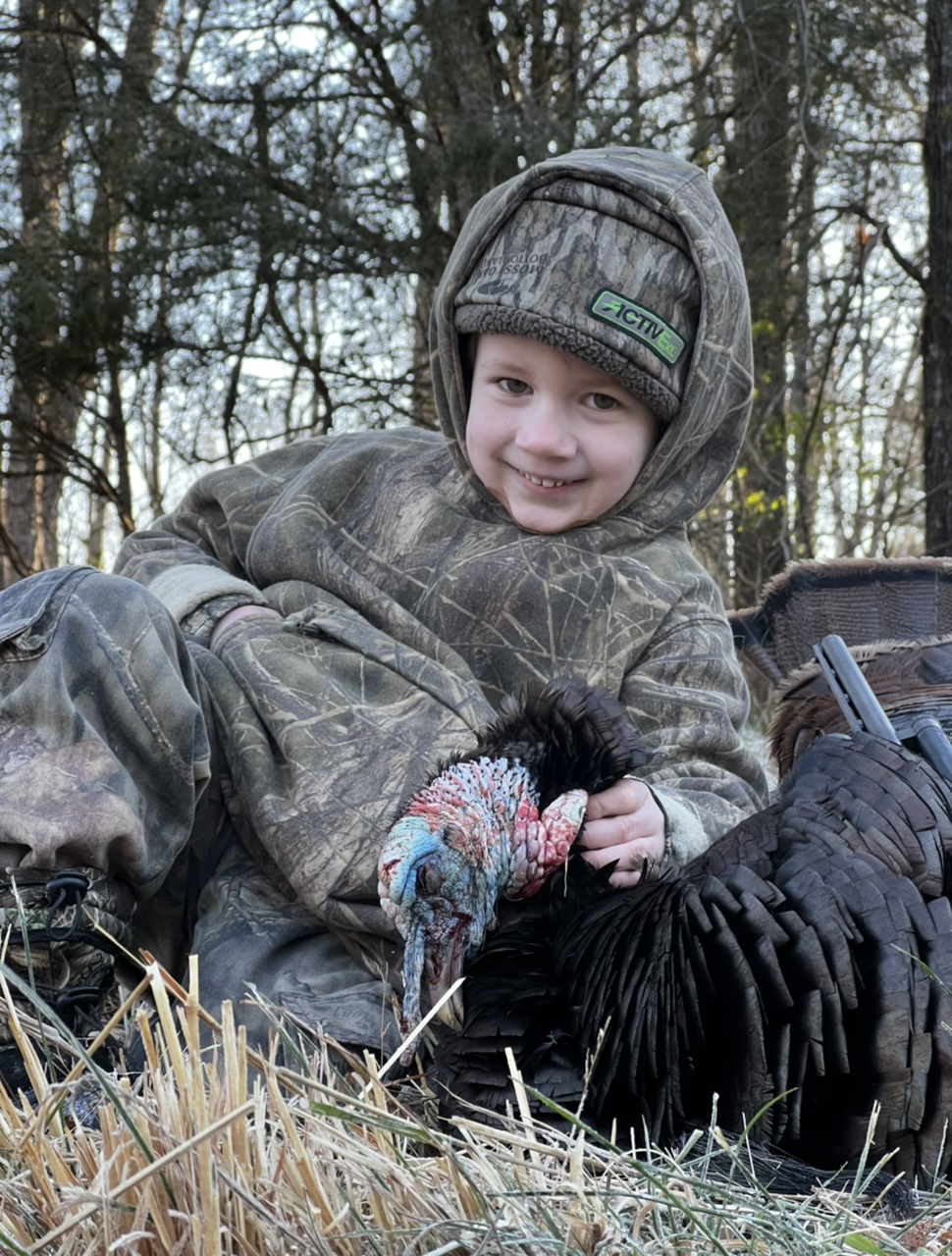 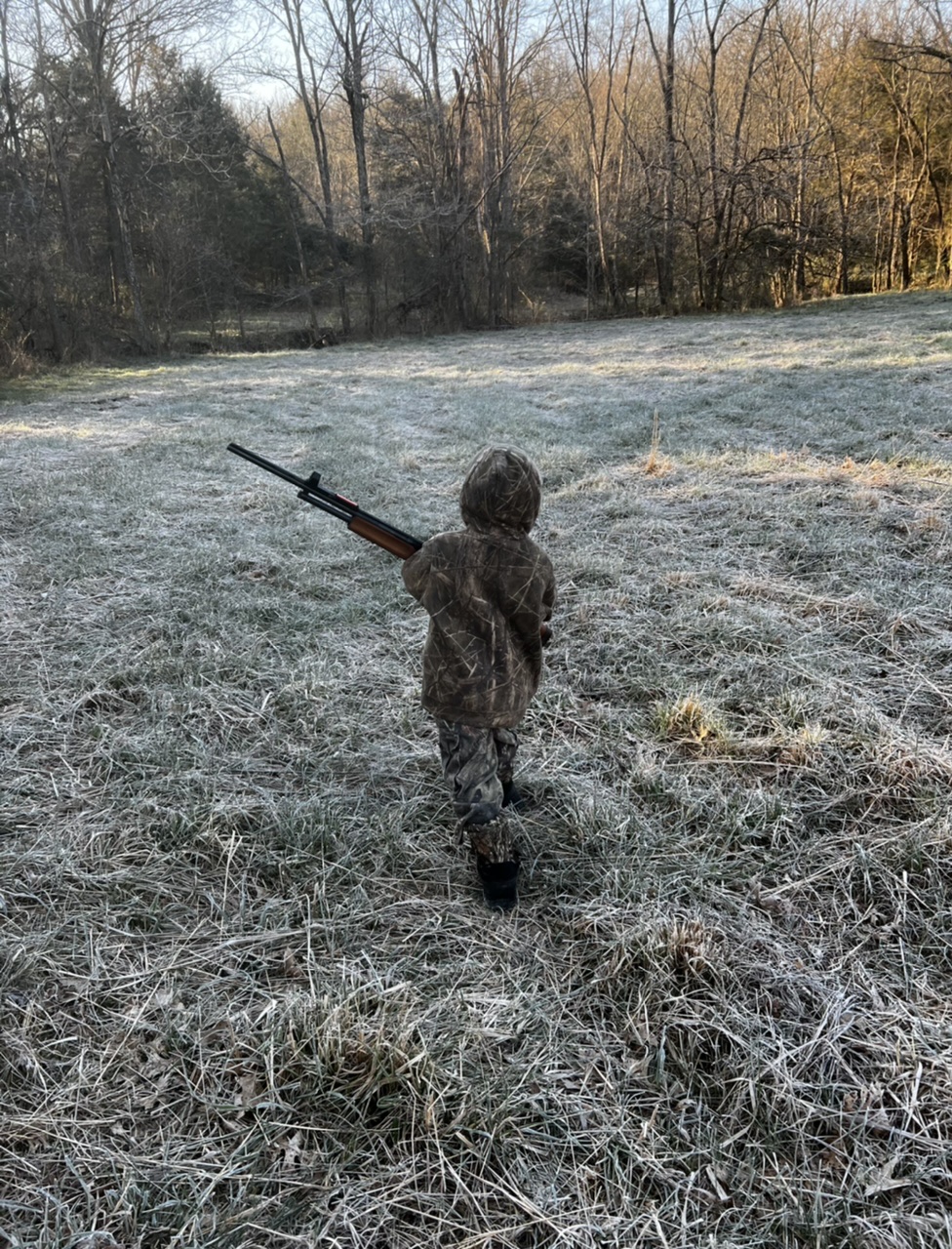 Nice, congrats to the youngun

So awesome! Huge congrats to him, and good job dad! This should fire your other son up and have him ready in the morning!

That’s the whole darn business right there. Congratulations to the both of you.

Awesome, congratulations, that big smile says it all.....

That just made my morning congrats young man and dad!!

Congrats Connor and dad, way to go boys! Bet the older one sat straight up in bed when that gun went off! .
J